Since Wrestling is certainly a Martial Arts style, I wanted to touch base about something that happened a couple weeks back. It is an amazing story about a young female wrestler that shocked the world at the recent Rio Olympic games. The American wrestler defeated Japan’s Saori Yoshida 4-1 in the 53-kilogram freestyle final to win the first-ever gold medal for a United States women’s wrestler and crush Yoshida’s attempt for a fourth straight gold. It reminded me of American wrestler Rulon Gardner’s victory over three-time gold medalist Aleksandr Karelin at the 2000 Olympics. I felt a similar feeling when I saw both victories because I knew the odds were against both champions when they walked on the mat for those fated matches.

After the match, Maroulis said “At the end of it, I was like, ‘Really, I just did this?” she said. “Like, oh my gosh!’” Yoshida was trying to become the second woman to ever win four Olympic gold medals in a single event across four Summer Games, and the second wrestler to win four Olympic golds. Yoshida’s teammate, Kaori Icho, accomplished the feats Wednesday by winning the 58 kilogram gold. Yoshida hadn’t lost in a major tournament in a lot of years, but she had been less dominant in recent tournaments, and Maroulis was on a two-year win streak so it wouldn’t have seemed so hard to accomplish. The fact remained that Maroulis had wrestled Yoshida in the past and been wildly unsuccessful in coming close to a victory. The humble Olympic gold medalist went on to say,

“It’s an honor to wrestle Yoshida, for someone to win three gold medals and come back and risk that and accept that challenge to win a fourth – that’s another four years of work, dedication, of giving your life to the sport.” ~ Helen Maroulis, USA Olympic Gold Medalist

In true sportmaship like Martial Art behavior, Yoshida made no excuses after the match when asked why she lost. “Just that the opponent is stronger than me,” she said. “I should have attacked sooner and faster, but the opponent was stronger than me.” Maroulis said her coach, Valentin Kalika, played a key role in the victory. But even with the game plan in place, she became a bit tense before the start. “I’m like, stepping on the mat, and I’m thinking, ‘I don’t even know how this is going to get done. I don’t know. I’m just going to trust, and I just want to give my all,’” Maroulis said. To add to the drama, Maroulis fell behind 1-0, but a takedown early in the second period gave her the lead for good. “I’ve dreamed of this my whole life,” Maroulis said. “I put it on this pedestal.” Sounds to me like she knew her objective and tried her hardest to accomplish it.

For Maroulis, things went much deeper than a single match. I read some interesting things about the back story that help me respect the work ethic and attention to detail of this young wrestler. Maroulis prepared in every way possible, she even learned as much Japanese as possible to be able to understand Yoshida’s coaches when they were yelling instructions. Maroulis had to overcome that voice in the back of her head that was telling her that she was going to wrestle not only the best wrestler in the world but a wrestler who had beaten her at every attempt in the past. Maroulis was also ranked number one in the world, but at a different weight class, when she was asked why she wanted to wrestle in a different weight class, she simply said, ”
That’s Yosida’s weight class.” There it is there. Her winning attitude in a fearless nutshell.

Maroulis start in wrestling is storied and noble. She was a training partner for her brother because he didnt’ have anyone else to practice with at times, she then expressed her interest to wrestle. Her dad told her yes, but only under the condition that she could only continue to wrestle if she won her first match. She did just that, however after that initial victory, she went on to lose the next 30 or so matches she wrestled. She persevered through that to become one of the most prolific wrestlers in the history of the united states. She is a trailblazer. At her young age, she certainly has more World and Olympic titles to go after, but being the first female American wrestler to win gold in the Olympics is something nobody can ever take away from her. Congrats and I’m proud you represented my country in those games. 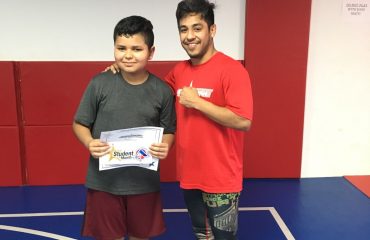