Published earlier this week in The Sun, Adrenaline Fighter Jalin Turner of San Bernardino is killing it. Jalin, AKA The Tarantula is a 23 year old San Bernardino Fighter who has been training at Adrenaline for several years. Recently he took on the biggest fight of his life with the UFC. 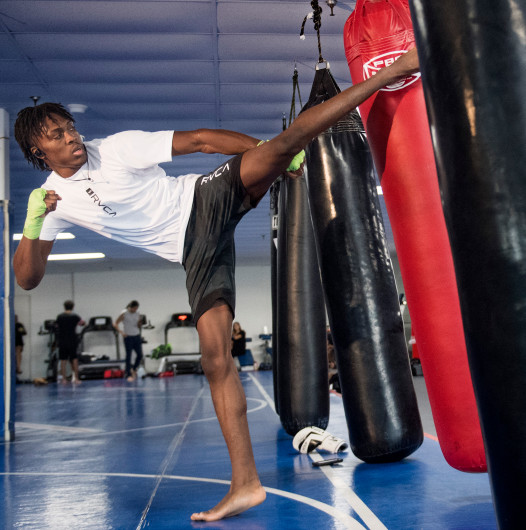 MMA pro Jalin “The Tarantula” Turner, 23, originally wanted to be a skateboarder and had as many as 200 tarantulas at one time. The San Bernardino, Calif. athlete stretches and soars at his local Adrenaline MMA Gym on Tuesday, Oct. 24, 2018. (Photo by Cindy Yamanaka, The Press-Enterprise/SCNG)

A familiar calm swept over Jalin Turner minutes before the biggest fight of his life.

Just two weeks prior, ahead of UFC 229: McGregor vs. Khabib in Las Vegas, Nev., the 23-year-old by way of San Bernardino accepted a welterweight bout against an American-born Brazilian mixed martial artist three years his senior.

While Turner, two years a professional, typically fights at 155 pounds, the eager UFC newcomer agreed to meet “The Silent Assassin” Vicente Luque at 170.

“A chance to fight on the biggest card in UFC history?” Turner said recently. “There was no way I could say no.”

As the 6-foot-3 Southern Californian stood awaiting his entrance into the T-Mobile Arena, his mother, sister, fiancée and soon-to-be father-in-law in the crowd, his 10-month-old son, Jeziah, watching at home with family and the support of a region behind him, Turner felt no nerves, no jitters, as “New Patek” by the rapper Lil Uzi Vert, echoed through the arena.

Time to go, he told himself.

“Your dreams can come true if you really want them to,” said Lakisha Shaw, Turner’s eldest sister. “Just follow the path ahead of you. It could’ve went so many ways for someone in a community filled with crime and danger, and just to succeed over all those things and not fall into temptation is a victory in itself.

“The way Jalin was raised, the way our mom raised us, the cage is nothing to him.”

Turner originally wanted to be a skateboarder.

Born in Los Angeles, but raised in Fontana and then in San Bernardino, the youngest of Deidra Turner’s three children, and the only boy, spent much of his childhood on, and eventually off, four wheels. The boy built pain tolerance by breaking bones and spraining ligaments; mental toughness by living in a household run by three older women.

“I got the full younger brother treatment,” Turner recalled. “I couldn’t get away with anything.”

“I was second in command with raising him,” said Shaw, 40. “We had a very close relationship. I more or less looked at him as a son than a brother. He was a really nice kid, really fun to be around. He had a positive attitude, really no trouble, really not a troublesome kid.”

In his early years at Summit High in Fontana, injuries kept Turner from playing for the school’s football and basketball teams. Admittedly terrible at track, he was a natural at wrestling and worked hard as he prepared for his sophomore season.

But a broken finger sidelined him indefinitely, and the following year, Summit’s wrestling program was axed amid district budget cuts.

When her son first told her about his new hobby, Deidra Turner feared for his safety. Shaw did, too. But the teenager explained why fighting was his passion and assured his family he wouldn’t be pursuing such a career were he not fully committed.

“We keep that speech in the back of our heads,” Shaw said this week. “This is his dream. It comes along with him.”

After trying out for and making Adrenaline’s fight team, Jalin Turner decided to forgo college to fight full time.

“I told him, ‘If you decide to take this UFC route, you have to be the best,’” Deidra Turner said. “‘You have to take this seriously. I want you to know if you’re going to do this, I’ll stand behind you.’

“And I’m his biggest fan now.”

While he has only five now, Jalin Turner once had as many as 200 tarantulas in his collection.

“The Tarantula,” he nicknamed himself, an ode to Silva, better known as “Spider” to mixed martial arts fans.

In high school, Turner craved the wrestling room. “It was torture,” he said, “But I loved it.” That feeling followed him into the octagon, and in late 2013, Turner joined the California Amateur Mixed Martial Arts Organization, fighting out of San Bernardino.

The young southpaw won his first two bouts and six of eight over a three-year span. He fought in Pasadena, Riverside, Adelanto, Pomona.

Turner was officially an up-and-comer, with his head on straight and potential to spare.

“He was never in gangs. I never had to worry about his pants sagging, about him getting caught up in the neighborhood,” Deidra Turner said. “He showed you can rise above everything you see here. Sometimes, it’s good to take that route, put yourself in a situation where you’re put at a disadvantage and have to take the opportunity to pull yourself up and rise above it.

“Never better than, but rise above, and make yourself a better person.”

That June, The Tarantula won again.

“When I was an amateur, I had a superstition once I started winning, to tell myself to go in there and have fun,” he said. “But once I went pro, I changed my whole mindset. I told myself to perform, to win, to go out there and be yourself.”

It’s a Wednesday afternoon and for the first time since Luque felled him at UFC 229, Turner is all smiles, working a red heavy bag at Adrenaline in San Bernardino.

As Adam Rothweiler, Turner’s longtime head coach, helms a Muay Thai class of about two dozen, Turner wrestles with Rothweiler’s 2-year-old son, Elijah. Not many people walk into Adrenaline after work that Turner – fierce inside the octagon, but magnetically charming out of it – doesn’t know.

“We’re a family in here,” said Rothweiler, 32. “My kids, they love (Turner). It’s a family affair. We all have a good connection, which makes it better as coach and fighter.”

To fight in Las Vegas, Turner accepted a multi-bout contract with UFC. He hopes to fight again in February, and in his normal weight class, 155.

While Turner, whose professional record dropped to 7-4 with the Oct. 6 loss, hasn’t yet watched the entirety of his fight with Luque, he’s watched highlights, joking recently the only thing he learned was “not to fight at 170.”

“I can’t be mad about the outcome,” he said. “I had nothing to lose. I got a contract with UFC, fought on two weeks notice. I got more exposure from this loss than any win I’ve had. I’m thankful for everything that’s played out from it.”

After Turner was felled in Las Vegas, his mother and sister joined him inside T-Mobile Arena, where mixed martial arts fans young and old asked him for photos and autographs.

“It took about an hour to get through the pictures, the congratulations, the younger fans,” Shaw recalled. “And I just saw the smile on his face the whole time.”

From UFC 229, Jalin Turner kept his gloves, hand wraps and a poster of the card.

The cherished memorabilia likely will join trophies and medals from his amateur past inside the San Bernardino bedroom out of which he fights.

“This is the place I call home,” Turner said. “The place I’ve known my whole life. It’s shown me support and love, so I want to return it one way. Fontana, San Bernardino, the Inland Empire as a whole, there’s no better place to do it than here.

“I started from nothing,” he added. “Once I make it big, I want to take everybody I can with me.”

Retrieved from: San Bernardino’s, The Sun

HOW DO I FIND A GREAT PLACE TO TRAIN?